The higher he climbs, the more precarious his position.

The one-line excerpt: “You did some serious snow with Tati last night.”

BY JAMES MCDONALD, OUT Magazine 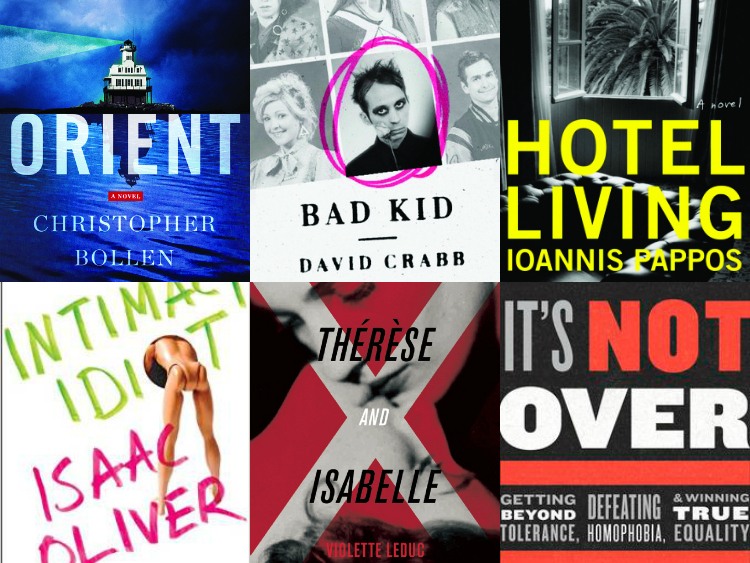 The gist: After Crabb’s Texas teenage self discovers a grungy band of misfits, he finds a path to self-acceptance —one fueled by LSD and cheap cigarettes.

The one-line excerpt: “These were surely the cult kids we’d heard about on the 10 o’clock news, the ones who murdered stray cats on chalk-drawn pentagrams in the park.”

Thérèse and Isabelle, by Violette Leduc (Feminist Press at CUNY, $15.95)

The gist: When Leduc first penned this romantic tale of two girls at a French boarding school in 1966, it drew praise from her peers, but censorship from her government. Fifty years later, it’s finally available in English, a delicate yet deliberate account of forbidden love.

The one-line excerpt: “We had cast off our families, the world, time, certainty. Clasping her against my gaping open heart, I wanted to draw Isabelle inside. Love is an exhausting invention. Isabelle, Thérèse, I pronounced in my head, getting used to the magical simplicity of our two names.”

THE CALL TO ARMS

It’s Not Over: Getting Beyond Tolerance, Defeating Homophobia, and Winning True Equality, by Michelangelo Signorile (Houghton Mifflin Harcourt, $27)

The gist: With progress as staggering as ours, Signorile says a backlash is inevitable—it’s already begun. His response? A battle plan, brutally honest and brimming with hope.

The one-line excerpt: “There will be an impulse to accept less than what we deserve, especially with conservative and Republican voices increasingly proposing that we cut deals and make compromises on equality. With your bold new attitude, draw a line in the sand. Tell yourself that mere acceptance and mere tolerance are not enough.”

The gist: Stathis, a Greek immigrant turned white-collar exec, lives out of hotels and survives on sleeping pills. The higher he climbs, the more precarious his position.

The one-line excerpt:  “You did some serious snow with Tati last night.’ ”

The gist: In this collection of personal essays, Oliver muses on everything from subway rides to Grindr. With his eyebrow cocked and “murse” in hand, there’s no such thing as “too far” for this New Yorker.

The one-line excerpt: “To the gentleman who made me hide in his closet so he could pay his cleaning lady: First of all, she totally saw me. Second, that’s all you pay her?”