It is compellingly intense. I had to have the rare cigarette to digest it. 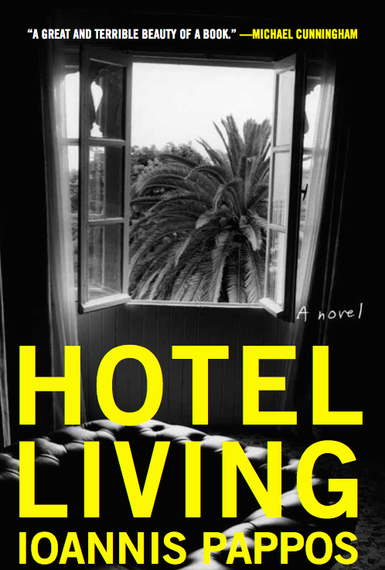 In his debut novel, Hotel Living (out on June 23), Ioannis Pappos, a Greek immigrant who mixes his life as a management consultant with his passion for writing, presents a world of testosterone and international finance, pampered — or roughed up — by unique hotels, tenement buildings, insider trading, bespoke suits, fistfights, and fast sex.

Hotel Living is the story of Stathis Rakis, who abandoned his Greek village for a more worldly life through an MBA at an elite business school. After falling in love with a liberal New England journalist with a good conscience, Stathis moves to the United States to begin the life of a high-powered consultant for a company called Command. As the economy recovers and a new bubble expands in a post-9/11 world, Stathis drifts upward, bearing witness to the criminal decadence that will become the 2008 financial crisis. He spends the very few hours of the day that aren’t consumed by work draining the minibar, battling insomnia, and bingeing on more than room service in his expensed suites in New York, Los Angeles, Paris, and London. In a world of insiders — from corporate suits to Hollywood celebutantes — Stathis remains the outsider: too foreign to be one of them, too cynical to turn back.

Phillip Miner: I finished your book in two days; I couldn’t put it down. It’s compellingly intense. I had to have the rare cigarette to digest it.

Ioannis Pappos: Please send me your patch bill. No, seriously, I am very flattered.

PM: You’re very welcome — and don’t worry; it was just one. What I love about fiction is that you can change the rules. The characters you write are complex and don’t behave like one would expect. Could you talk about that?

IP: Hotel Living is about exploring and melting stereotypes. There’s the fisherman who turns into a pseudointellectual, the jogger who loves cocaine. There’s no black and white. Everything is together and bounces off each other. I believe that that is what life in big cities is about, at least in New York.

“Ioannis Pappos’ Hotel Living could be The Great Gatsby, reincarnated in a contemporary hell beyond even F. Scott Fitzgerald’s imagination. It’s harrowing. It’s smart and sexy; it’s funny and tragic. It is, in short, a great and terrible beauty of a book.”

–Michael Cunningham, Pulitzer Prize-winner and New York Timesbestselling author of The Snow Queen and The Hours

PM: Fluidity is everywhere in your novel. Almost everybody has a flexible sexuality. What are you exploring with this choice?

IP: Stathis, the protagonist, relies on a friendship for clarity during his insomnia and drug-muddled spirals. Guy’s guys tend to love each other. Any friendship is a form of love. For some, it’s the ultimate form of love because friendship is the love that we are most liable for. In Hotel Living I created a world where if things got physical, it was totally acceptable. It is part of a meta sexuality-segmenting era.

PM: Identity is a major theme in your book. Class and immigrant status are explored in depth, and yet homosexuality is never an issue. The protagonist’s relationship with his boyfriend is a major plot driver, but sexual identity never comes up. Did you make that choice purposefully?

IP: I was halfway through the first draft when I did an auto search for the word “gay” and I got no response. I realized that I had written half the book without using it, not because I was avoiding it but because it had not come up. Then it almost became an inner bet to see if I could finish the novel without it, yet — and this was important — without jeopardizing the plot or any character’s development. Four years ago, when I first thought about finishing a story with no labeled sexualities, it was perceived as marginally science fiction. But today more and more people come out in terms of some sexual fluidity. Hotel Living is a post-gay novel. We are in a post-gay era, at least in certain parts of New York, and I see that as a form of progress, as I also see progress in the recent surge of queer drive. Hedwig went to Broadway; Ira Sachs’ Queer/Art/Mentorship makes being different cool again. We need advocacy. Maybe we are getting more focused as far as issues and geography. But it is because of all the advocacy so far, all the fights, that novels like Hotel Living can get published. And there is so much more to fight for inside and outside New York.

“As he romps through the highs and lows of the global economy, Ioannis Pappos will make you laugh even as he lays bare the very real human costs of our recent — and current — economic troubles. Hilarious and heart-breaking, Hotel Living captures perfectly our own interesting times.”

–Scott Lasser, author of All I Could Get

PM: What did you learn about yourself from writing the novel?

IP: Many art forms — acting for example — can be more of a team game. Writing a book, whether you want it or not, you have to be by yourself. So you get to know yourself. And, if you are lucky — if — you end up liking yourself.

PM: You said “if” twice. Can I assume that there was a point where you did not?

IP: For a second I lost my Greekness, my job, my friends. When you lose your identity, you don’t automatically find another one. It’s not like there’s another outfit waiting for you. You roam around, and that’s when interesting things happen. That was the case with me. At some point all I had was my brain and my memories. So I had to sort it all out. In a nutshell, this book came out of my lack of control.

PM: And where are you now?

IP: Look around. We are in a state of euphoria. You can’t even get seated in a downtown restaurant unless you know the owner. You can’t believe that we came out of the biggest recession ever. Culturally, it’s feels like no one has learned anything, like we wasted a huge test on moderation. Stathis’ ups and downs trailed the global decadence of the last decade. I hope that, today, I do not resemble my protagonist. I learned from my solitude and moved on. Some. I’m still “nexting” — like Stathis — but I’m working on things.

“Ioannis Pappos may be the F. Scott Fitzgerald of the wired postmillennial age. Hotel Living is an unforgettable debut — an all-night party, a race around the world, a dangerous high stakes game played in the violently competitive world of international business. The novel’s urgent pulse, no-holds-barred pace, and heartbreakingly honest narrator will thrust you into a captivating story that is, all at once, about love, sex, class, greed, and the search for one’s humanity against the blinding light of the American Dream.”

Hotel Living is available on June 23 from HarperCollins.